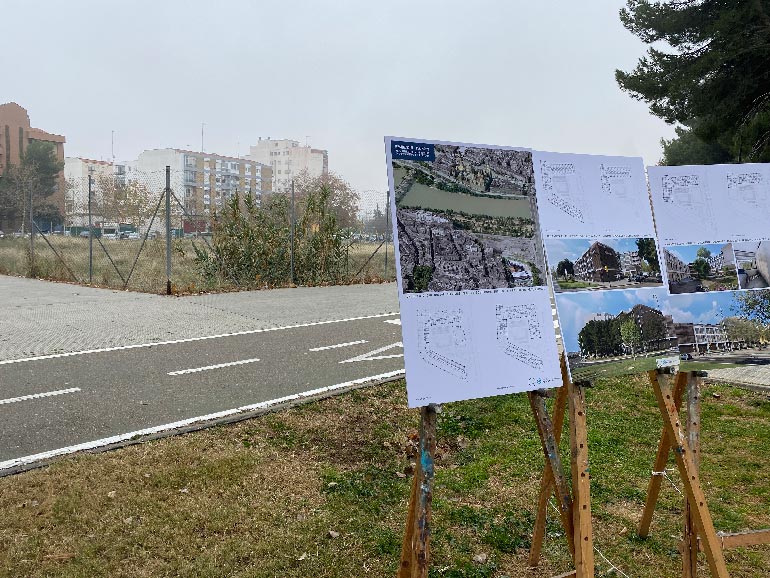 Up to 336 young people will be able to get a place in the new residence of the Government of Aragon that will be installed on Avenida Pirineos in the city of Zaragoza. A complex of 12,500 square meters built above and below the ground level that is located at the intersection with Calle Arquitecto La Figuera. It is estimated that the works could begin in the middle of next year, “if everything goes well”, and the project execution period could take between 14 and 15 months.

According to have explained from FAV Arquitectura, designers of the project. It is a model of residential building that follows the guidelines of “Coliving”, from northern Europe. In it “you have a more private space, but you are part of a society”, they have indicated.

The private spaces will be the rooms of each of the tenants, the cost of which rises to 335 euros per month. They are “very spacious rooms with all the equipment, private bathroom, kitchen, internet access, television, and it will always come fully equipped”, the architects have detailed. But in order to bring guests to socialization, users will have common rooms such as kitchens, lounges, study and work areas and a 400-square-meter coworking space. The bedrooms will have an area of ​​18.5 square meters and the ratio of total space per resident is 37.5 m2. On the other hand, 5% of the rooms will be accessible for people with hearing, visual or mobility disabilities.

The new residence will not only be for residents, but it has also sought to “do something that could help generate life in the neighborhood,” he added, in addition to being a building with “almost zero energy consumption” and which will have facilities geothermal and photovoltaic panels. At first, all the residential rooms will be for individual use, although they do not rule out pairing different bedrooms to be able to house couples or even families. In any case, a priori, the allocation of places will be carried out following the order of presentation of applications, with the only requirement of being a young person.

Priority for the Government of Aragon

The Minister of the Vertebration of the Territory, Mobility and Housing, José Luis Soro, attended the presentation ceremony and stressed that one of the priorities of the Regional Executive is to increase “substantially” the public park for rent. “There may be other formulas that help, but the priority has to be this. In the first place, resorting to the idle public heritage, to the plots, land or buildings that are not in use right now ”, he pointed out.

Likewise, he has insisted that housing will continue to be one of the fundamental lines of action for his department, with the arrival of European funds. “We have received an important part for rehabilitation, and from next year we will receive another part both for the promotion of public housing on public land, and for the rehabilitation of other buildings that are not currently intended for housing,” Soro has advanced.

The counselor stressed that the Government of Aragon will never lose ownership of this building and pointed out that “this project is the spearhead of the policies that we are promoting to expand the public rental park, it had to be an emblematic building and will to be that symbol of this new alternative to live and share life with other people ”.

Of this residence, in particular, he stressed that it will be built on public land, so the 75-year public concession will be free for the foundations in charge of its management: the Rey Ardid Foundation and the Posidonia company. The entities are in charge of drafting the project, whose completion is scheduled for the end of this year; of the execution of the works once the urban planning license has been received, and of the management, which, in this case, will be the responsibility of the foundation’s social enterprises.

“From the Rey Ardid Foundation we consider that all the services that are going to be provided in this building will be provided from our social enterprises, which helps us to generate jobs for groups that find it more difficult to enter the labor market,” he said. stated the general director of the Rey Ardid Foundation, Maite Albajez, informing at the same time that ten people will be those who work in the center, adding “to the 600 that we have employed in social enterprises.”