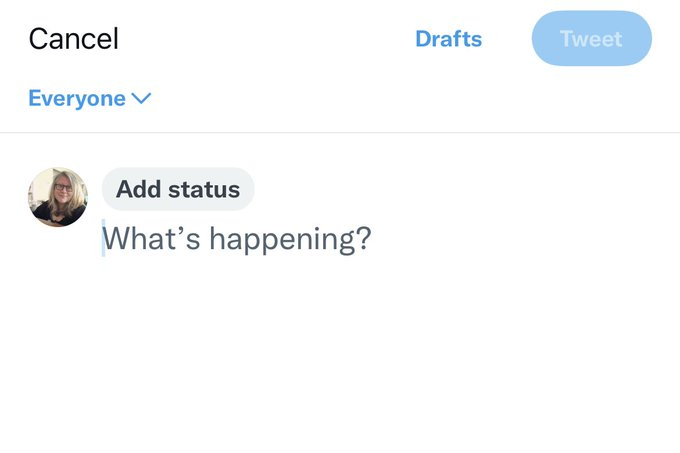 Social networks are constantly being updated and new features do not always please users. An example of this is the possibility for a user to set the status when publishing a tweet.

Although only in testing, the feature is already being rejected by users.

For a long time, Facebook has allowed users to follow a post with its status, allowing them to describe their state of mind, for example. Now, Twitter appears to be testing a similar feature.

As revealed by Gizmodo, if your feelings align with the options offered by Twitter, the user will be able to describe to the Internet how they feel, through the status. The concept was revealed in a leak earlier this year, and it appears to be coming to fruition now.

For a limited time, we are testing a feature that allows you to add a status from a predetermined list to your tweets to provide more context to your followers.

I don't know how twitter managed to release a more embarrassing and unusable feature than cotweets in the same month but here it is. these are all the statuses you can use. no custom statuses allowed pic.twitter.com/2BPwku1qi1

In recent months, Twitter has mentioned and started testing some new features that users don't like. Joining the list, this status feature has also not been well received.

According to some images, this testing feature allows users to add an emoji and a short phrase to posts, with the aim of describing, as the name implies, their status, among the 16 predefined ones.

For one of Gizmodo's writers, the status definition is "completely uninteresting". In addition, he considers that the publications made through Twitter are self-explanatory and do not need to be accompanied by a state.