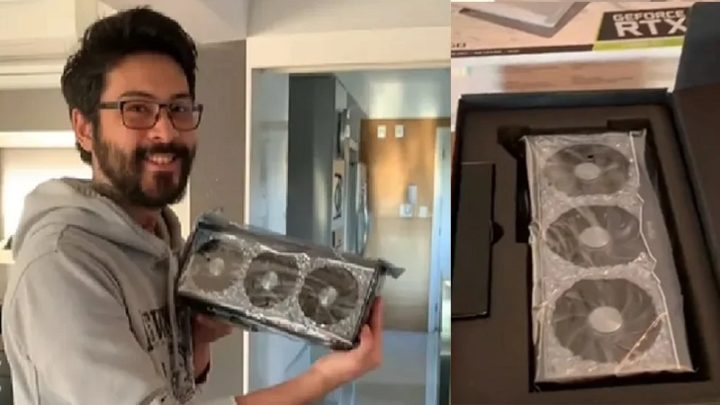 In the technological world we are used to seeing some unusual news. And one of the most recent was that of a Brazilian user who ordered an Nvidia GeForce RTX 3090 Ti graphics card from Amazon, but instead of the GPU, he received a sandbox…

And after several complaints and some frustration in the mix, the user finally received the graphics card he had actually ordered.

Received sand, but you already have your RTX 3090 Ti

A few weeks ago we made known another ridiculous situation that happened in the technological world. The Brazilian Maurício Takeda e Sousa, son of Maurício de Sousa, the author of Turma da Mónica, ordered the current high-end graphics from Nvidia through Amazon. However, when opening that same order, he came across not the printer, but a bag of sand. The surprise was captured on video by the user, who then shared it on his Chinese social network TikTok account.

But there is now good news, as Maurício Takeda e Sousa finally received his Nvidia GeForce RTX 4090 Ti GPU, customized by the GameRock brand, 20 days after purchase. The man shared what happened on his TikTok account again, but this time to reveal the good news. However, it seems that the videos were later removed.

We remind you that after receiving the real lure, which cost him 14,500 reais, about 2,600 euros, Maurício, who is a streamer and also a musician, contacted Amazon on the day the order arrived demanding that the graphics card was actually sent.

In the last video, which is no longer available, the channels that still saw it refer that the injured party said that "despite all the delay, things started to move after I spoke directly with Amazon's Executive Relations Department. From there, they contacted the Tertz partner store that supplied and sent me the product, and I even got a sweet note.".

Finally, Maurício also thanked the support of his followers, family, friends and journalists who reported what had happened. And he confesses that he didn't believe the case would be solved.