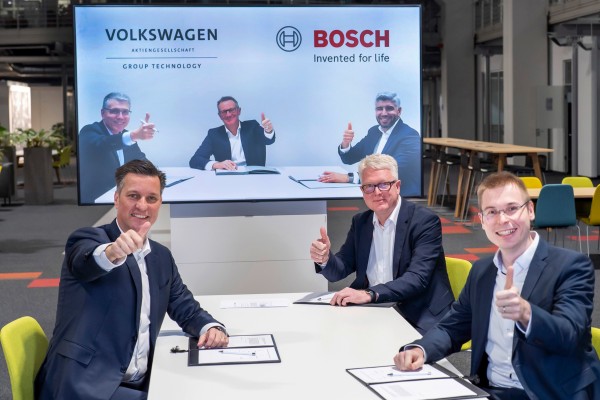 Volkswagen and Bosch have signed a memorandum of understanding to explore a joint venture dedicated to providing Europe with battery equipment solutions. The two companies aim to provide integrated battery production systems and on-site maintenance and augmentation support to battery cell and system manufacturers, Volkswagen said.

The JV is expected to help VW meet its target of building six cell factories by 2030, but will also be available to service other factories across Europe. The companies did not disclose how much they would invest in the venture.

As automakers set increasingly ambitious targets to deliver millions of electric vehicles over the next few years, they are working to become more self-sustaining and less reliant on getting battery supplies from abroad, which has become even more problematic with the pandemic. supply chain problems. 2021 saw a number of battery joint ventures between automakers and cell suppliers interested in building battery cell production facilities close to home, but VW was already there with a 2019 JV with Northvolt and its first planned production facility in Saltzgitter, Germany.

“Europe has a unique chance to become a global battery power in the years to come,” said Thomas Schmall, VW board member responsible for the automaker’s battery plans, in a statement. “There is strong and growing demand for all aspects of battery production, including new gigafactory equipment. Volkswagen and Bosch will explore opportunities to develop and shape this new multi-billion industry in Europe.”

Volkswagen is also joining the growing trend of automakers finding ways to diversify revenues by offering services to competitors. On Tuesday, Ford and ADT formed a joint venture to provide a vehicle monitoring system that can be connected to any make or model of car to help prevent theft.

“Our decision to actively engage in vertical integration of the battery manufacturing value chain will tap into considerable new profit pools,” added Schmall. “The establishment of a fully localized European supply chain for electric mobility made in Europe certainly marks a rare opportunity in business history.”

THE European Battery Alliance said a third of global batteries need to be produced in Europe by the end of the decade to reduce dependence on the dominant markets of South Korea and China, but so far battery cell factories capable of generating less than 900 gigawatt hours of capacity in Europe are set to represent just 16% of global production by 2029.

Tesla is planning to build a battery factory in Berlin with a capacity of 50 GWh alongside its 300-hectare site to build Model Y vehicles, but both the factory and the factory are still awaiting approval from regional authorities to start production, despite the CEO Elon Musk’s decision. earlier promises that production would begin in November or December of last year.

Volkswagen’s planned plant in Salzgitter should produce 40 GWh, but if the automaker manages to increase production and build a total of six factories, it should have a combined output of 240 GWh.