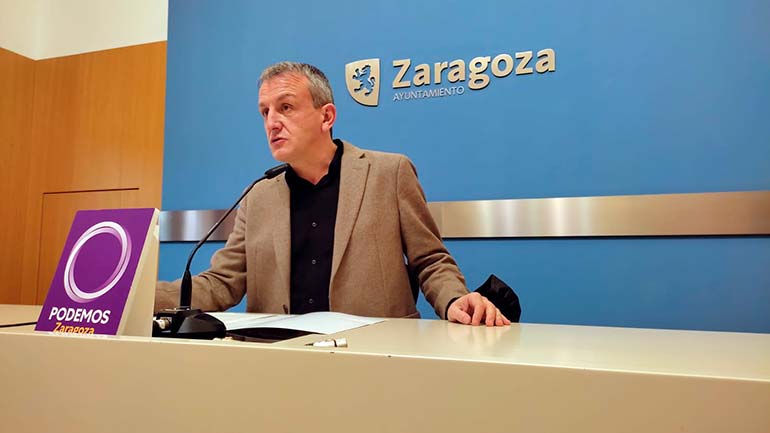 The municipal group of Podemos has denounced “the numerous breaches and the extremely poor management of a government and its mayor, Jorge Azcón, more concerned with his candidacy for the DGA than with responding to the needs of the residents of Zaragoza.”

“Some breaches that are especially flagrant in the area of ​​Urbanism and that have led the training to register several initiatives for the commissions this December,” said councilor Fernando Rivarés.

“Not its own budget or the agreements it has reached with its partner Vox, and not even its own government program. Azcón is overtaken by the management of the City Council and the result is a paralyzed and abandoned city, when it is not depleted by the sale of land and the gift of public patrimony to favor business and the balls of its friends ”, he criticized.

Regarding the level of budget execution, Podemos has highlighted that while the items in chapters 6 and 7 barely reach 41%, in the urban planning area it is only 22.20%.

“Of € 30.1 million that Serrano had available, one month before the end of the year it has only been able to execute 6.7 million. A figure that we can qualify as ridiculous, of course, very far from the worst year of the previous corporation, with € 30 million spent and 47.2% executed ”, declared Fernando Rivarés.

The percentages of execution published these days reveal that once again the neighborhoods are the great forgotten of the Azcón government: the nursery school of Parque Venecia, the health center or the pools of La Almozara, Giesa, the Imperial Canal, the neighborhood plans, the Harinera de Casetas, Juslibol, Ranillas, La Cartuja. “In most of the pending actions, the project has neither been started nor has been carried out. The same happens with industrial estates, the other great forgotten, € 0 ”.

Many promises but few fulfilled, such as those made to the residents of Zamoray-Pignatelli who once again see how the Azcón government removes it from its priorities in favor of the reform of another of its gold squares.

“Of the two million budgeted, despite repeated promises to neighbors and groups, € 800,000 has been allocated to Salamero and the other 1.2 million will surely end up being lost at the end of the year. Azcón has not intended to spend this item at any time and has sent his counselor to delay the Special Plan as much as possible. If there had been political will, the spending would have started to be carried out months ago, as the opposition demanded, ”insisted Rivarés, who confirmed that the training will study the response to this issue with the rest of the groups, which should be what as unitary and agreed as possible.

“This contempt, laziness and obscurantism towards the opposition by Azcón and Serrano is also beginning to be transferred to the issue of La Romareda”, they have reflected in a statement.

“45 days after the State of the City Debate, neither mayor nor councilor have said anything to any of the groups while the press begins to talk about January. The counselor not only rejected Podemos’s proposal to create a special commission to debate the new field, but in the last plenary session he promised to send the first reports to the groups during the past week. Tomorrow will be two weeks and there is no news nor are these reports expected ”, Rivarés said.

Podemos has pointed out how for the Government there seems to be no time to bring the groups together but there is time to give interviews and advertise in the press. “It is amazing that the counselor is talking about costs without knowing the UEFA regulations and inventing requirements that UEFA never asks for.”

The formation has described as “worrying that neither the mayor nor the councilor know that, since 2006, UEFA eliminated the star rating from the stadiums. 15 years have passed since then and the Government has not looked at the first paper it should look at to start a project. And it is a very bad sign that Serrano openly lies about the requirements of a field to have the highest category, repeating the need to have an underground access to comply with it “, recalled the spokesman for Podemos, who has referred to the UEFA regulation for Infrastructures of stadium, in which no underground access is required, just a closed parking lot. “Justifying costs of up to 200 million based on requirements that UEFA does not ask for, plus the refusal to publicly debate the matter begins to give us a very bad feeling,” he added.

For these reasons, the purple formation has announced that in the next Urban Planning commission it will formulate four questions to the counselor related to the field, in order to gather important information to make decisions. Four questions about what reports you have commissioned and the timeframe for when the groups will receive it, about the unbuilt public plots to see all possible locations, about the land value of the current Romareda and about the landowners in San José , “Our preference is that they be municipal land but since the counselor started talking about San José, we will ask him about the owners of those land, because if they end up being private, we want to know who they belong to.”