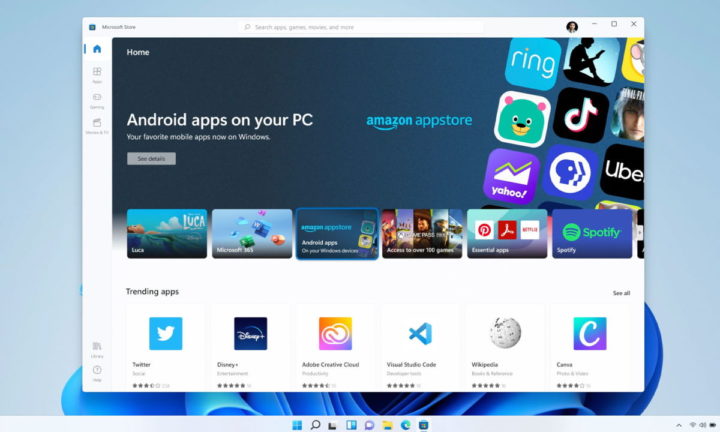 Microsoft’s bet on Android is not new and has grown exponentially over the last few years. This is without a doubt your mobile system of choice and the one that has been used to integrate with Windows 10 and Windows 11.

With the arrival of Windows 11 a new reality was shown. This system now has its own Android sub-system, which allows running apps natively. The WSA has now been updated and brings users the latest version, Android 12.1

Along with all the interface and function changes that Windows 11 brought, Microsoft bet on creating another unique novelty in this system. It integrated Android with its new version, as it had already done with Linux.

This one took a while to arrive and has some peculiarities, but it is certain that it will allow you to run Android apps natively, with all the expected features. For now it only interacts with the Amazon store, but it will probably be open later to other proposals.

Microsoft has announced that the Android build powering the Windows Subsystem for Android has been updated to Android 12L. This update (version 2204.40000.15.0) is rolling out to Windows Insiders in the Dev Channel.https://t.co/omPprrK1as

A doubt existed from the beginning and put some pressure on Microsoft. It was not known what Android's update policy is and how they would be released to the user. This has now been clarified with build 2204.40000.15.0. This one brings the new Android 12.1 and shows how simple the update will be.

In addition to this important novelty, Microsoft also guarantees other improvements in the integration of this version with Windows 11. We are talking about network connections, which are now the same where the PC is, allowing you to connect apps to external devices, but on that network.

Interesting that they kept the "Google Play System Update" string instead of naming it something else.

Another modification is the integration with Windows 11 itself. Notifications for camera and microphone use are now displayed, just like on smartphones. In addition, the configuration interface and settings have also been improved.

For now, this news is only accessible on the Dev channel of the Insider program. Soon it will be extended and improved, in order to give an even greater integration of Android with Windows 11, guaranteeing the new version and all its new features.