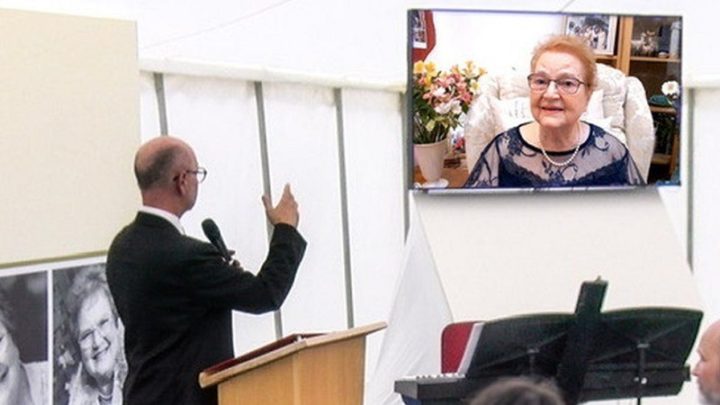 Every day there are funny and unusual news in the technological world, and many of them deserve to be highlighted given their curiosity and creativity.

Contents
Woman talks to people at her funeral using AIRead too:

The latest information indicates that a woman used Artificial Intelligence to talk to people during the day of her own funeral. And, of course, this was an idea that took everyone present by surprise.

Woman talks to people at her funeral using AI

Have you ever thought about what it would be like to be at the funeral of a loved one and suddenly a screen appears with the person who died talking to you? Well, at first glance, the situation seems strange and creepy, but if we think about it, it can even be an alternative way to better deal with the moment of grief.

a ridiculous situation recent it was that of Mrs Marina Smith who passed away and used Artificial Intelligence technology to make a peculiar surprise to all those who were present at her funeral. In this way, Ms. Smith appeared at the funeral ceremony on a screen through a holographic video reproduction.

Marina Smith died in June at the age of 87 and was a major activist for awareness of the Holocaust. At her funeral, the deceased gave a short speech about her life and also answered some questions asked by those present at the ceremony. And through the technology used, the effect created the feeling and illusion that you were having a conversation in real time, even with the person in front of you.

For this, a technology developed by the company StoryFile was used, dedicated to preserving the memories of Holocaust survivors, and whose CEO and co-founder is Stephen Smith, son of the late Mrs. Smith. The videos were recorded while still alive, as expected, where the deceased answers some questions. After her death, these videos and other data were compiled into software that helped to recreate the effect shown at the funeral. and not deceased's official website, whoever wants to can also interact with Ms. Smith.

In an interview with The TelegraphStephen Smith explains that "bereaved can achieve a freer and truer version of their loved one".

The idea causes some controversy and divides opinions. Recently, Amazon also announced its intention to get Alexa to communicate through the voice of loved ones who have passed away, as you can see in the following news item.