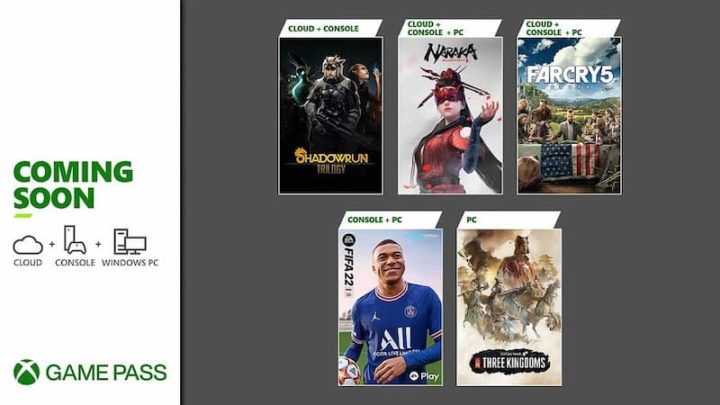 Xbox has just revealed another batch of games to join the Xbox Game Pass service catalog.

There’s nothing better than welcoming the summer and the return of the holidays than with a few more new games, right? Come see what…

Xbox recently released a new list of upcoming games (some have already arrived) in the Xbox Game Pass catalog, which will be available to all players who have a valid subscription to the service.

Check out the list, headed by the EA Sports title, FIFA 22.

Shadowrun Trilogy has been available on Xbox Game Pass since June 21st for both Console and Cloud.

The Shadowrun Trilogy comprises the 3 games in the series, which are characterized by being RPG with strong tactical gameplay and taking place in a dystopian futuristic world, in which magic has been awakened and lives among us, bringing to life wonderful fantastic and mystical creatures .

Originally created 30 years ago as a board RPG, the Shadowrun universe has acquired a cult status over more than 3 decades of existence.

Available since June 21, for PC.

Total War: Three Kingdoms is a game from the fantastic strategy series Total War, which recreates ancient conflicts that took place in Ancient China. The game, as is characteristic of the series, combines a high-level strategy aspect, with a more militarized aspect featuring real-time confrontations, with another aspect of management and expansion of the kingdom.

As players conquer new territories, there is a need to develop and build new support infrastructures.

Available June 23 for Console and PC.

FIFA 22 needs no introduction and the fact that it is now available for EA Play service subscribers is simply fantastic.

This is an excellent purchase for anyone who hasn't tried the EA Sports game yet. All modes will be available, such as the addictive FUT (Ultimate Team), the frenetic street games with Volta Football, a multitude of fast-paced games, women's football... all available on EA Play, for PC Game Pass and Ultimate members.

Available from June 23, for Console, PC and Cloud.

Naraka: Bladepoint is an action game that can take up to 60 players into fantastic combats inspired by oriental martial arts.

It will be available from July 1st for both Console, PC and Cloud.

With the action taking place in Hope County, Montana, "Land of the Brave and the Free", this game was the return of one of the most fantastic series of open world action.

The story of Far Cry 5 tells how Hope County is being infested by fanatical members of a cult, called Eden's Gate, who believe that the End of the World is approaching and with that all its inhabitants are in danger. Eden's Gate.

Our hero will have to face their leader, Joseph Seed and his brothers, the Heralds, one by one to free the community and restore peace to Hope County.

Meanwhile, the most famous turtles on the planet are also now available on Xbox Game Pass, with Teenage Mutant Ninja Turtles: Shredder's Revenge. Therefore, anyone who has a valid subscription to the service can now play this action title, on Console, PC and Cloud.

This amazing beat 'em up brings together Leonardo, Michelangelo, Donatello and Raphael, evoking the iconic turtle design from 1987 and paying homage to classic TMNT games such as Turtles In Time.

As usual, Xbox Game Pass catalog releases also mark this moment and as of June 30, the following games will no longer be available (don't forget that you can still purchase them with a 20% discount):

As for the news, what do you think of them? Good buys, right?