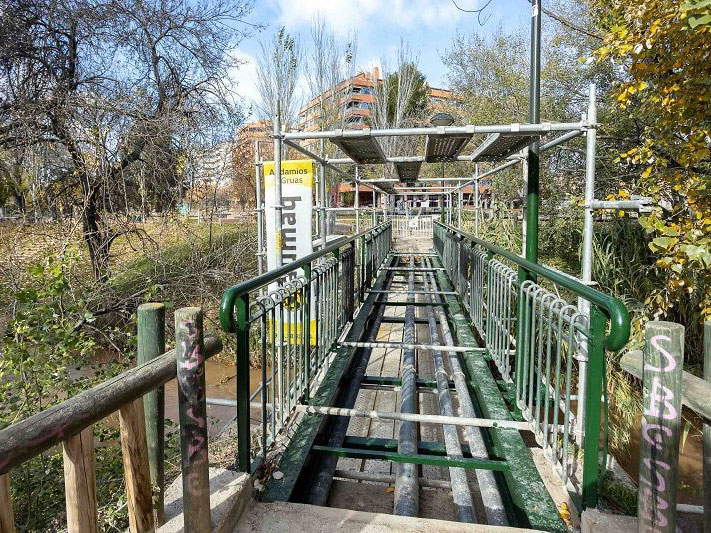 The Infrastructures area of ​​the City Council is carrying out the reform of several pedestrian walkways that cross the Huerva river in its final section, between Miguel Servet street and the mouth of the Ebro. These are four bridges located at the height of the streets Alberto Albericio, Alvira Lasierra, Villafeliche Park and at the mouth itself.

The Huerva walkways have a metal structure and a wooden floor and were very deteriorated due to the continuous humidity they receive from being located over the river. Added to this are the effects of the sun, rain or ice, which have caused the structures to rust and the planks to crack and lift in many places.

The Minister of Infrastructure, Patricia Cavero has indicated that “these works will solve these problems and guarantee safe walkways, eliminating the risk of trips and falls that now entail cracks and raised pavement”.

In recent weeks, several sections of wooden pavement have been prepared on the footbridge of the mouth, located in the vicinity of Puente de la Unión and now work is being done on the one that crosses the Huerva at the height of Alberto Albericio street.

The works at this point are scheduled to be completed in the next few days to continue later with the Villafeliche Park footbridge and that of Alvira Lasierra.

The works are being carried out progressively so as not to interrupt the pedestrian crossing at all points at the same time. For its execution it is necessary to place a scaffolding to protect the structure with a canvas and that the works do not affect the river bed. These consist of cleaning the entire metallic structure by sandblasting, repairing it and painting it. In addition, all the wooden floors are being replaced and it is being used to update the railings at various points to improve their safety.

In addition to these four walkways, Infrastructures has also replaced some sections of the wooden decking of the large walkway located on the shore of the Echegaray and Caballero walkway between the Stone and Iron bridges.

In total, these works will involve an investment of more than 90,000 euros and are in addition to other actions that the City Council has been developing to improve other pedestrian walkways, such as those that cross the Imperial Canal in Casablanca. In total Zaragoza has 122 bridges and footbridges distributed throughout the city.